The history of Kexchoklad

Kexchoklad − a chequered and active favourite since 1938

Kexchoklad is one of Sweden’s best loved chocolate products and the single largest product on the Swedish confectionery market. Kexchoklad is an active classic that has enhanced everyday life for the Swedish people since 1938. 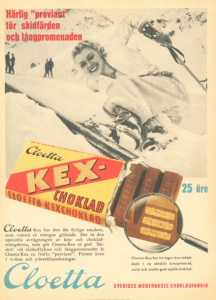 1920 Cloetta started to make chocolate-covered wafers under the name of “Five o´clock wafer chocolate” in 1921, and the product quickly grew in popularity.

1930 The brand Kexchoklad was born and registered in 1938 and for the first time, Kexchoklad’s iconic chequered wafer pattern appeared on the package in the word KEX.

1940 Kexchoklad showed its active side in various advertising campaigns and was already used in skiing environments. During this decade, Kexchoklad reinforced its design by making the chequered pattern more visible and the packages more red.

1950 Cloetta invested ambitiously in advertising and brand building for Kexchoklad.

1960 The chequered wafer pattern attracted attention and became well-known in Sweden. Once again it was decided to update the package in order to highlight the pattern and increase its visibility.

1980 The active side of Kexchoklad was strengthened. Advertisements in 1984 included messages like “Downhill skiers fall for delicious wafers!”, and in 1987, Kexchoklad proudly contributed to a Swedish expedition´s successful ascent of the world’s highest mountain, Mount Everest, which generated a lot of good publicity.

1990 The classic slogan in Swedish “God och glad, Kexchoklad” was born during this decade! The company increased the visibility of Kexchoklad by investing in a large number of events during the summer and winter seasons.  In 1999, a ten-year collaboration with the Swedish Alpine Ski National Team started, and the association between Kexchoklad and alpine skiing became strong.

2000 Kexchoklad developed its active nature further through sponsorship of the Swedish national teams of handball and football.

2010 Kexchoklad is still strongly associated with the Swedish mountains and downhill skiing. In 2010, “Kexchokladjakten”, a combined ski orienteering and word hunting where you look for large Kexchoklad letters in the lift system, was introduced. The event is still very popular and a real “must” for many families in their winter holidays.

Kexchoklad is a unique product – loved by all regardless of their age, gender or where they call home.