The history of Läkerol

The throat lozenge that so easily pops into your mouth and soothes your throat has a long, amusing and interesting history. Läkerol has survived two world wars, been delivered to royalty in a gold box and sponsored Sweden’s first sailplane flight. In addition, Läkerol has been a Purveyor to the Court of Sweden since 1916. 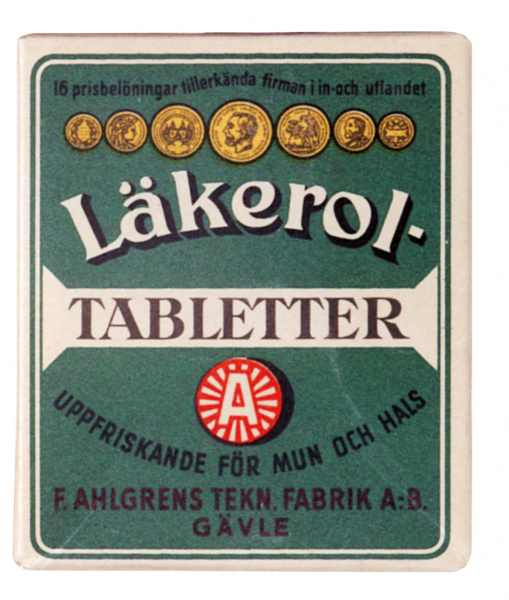 1900 Läkerol would not have been Läkerol if it had not been for Adolf Ahlgren, a wholesaler in Gävle, Sweden, with a nose for good business. At a German trade fair in 1909 he found an intriguing product, a cough drop that was sold by weight in German pharmacies. The ingredients were menthol, liquorice and gum arabic – which is made from the sap of the African acacia tree. Ahlgren took the name Läkerol from a liquid antiseptic, a product that was already in his assortment. Läkerol was launched, for appealing breath and a successful social life.

The sales of Läkerol started in Gävle and then spread to the rest of the country. The sellers were careful selected and had to certify that they would not sell the tablets to other wholesalers or at an unacceptably low price. By being more expensive that the competitors, Ahlgren created confidence in his brand. And the success of Läkerol was a fact!

Läkerol quickly spread outside Sweden’s borders, and two years after its introduction it was purchased in all of the Nordic countries. In 1913 the Russians were given the opportunity to sooth their throats with Läkerol, and its expansion then continued rapidly to the Netherlands, Poland, the USA, South Africa, Colombia, Mexico, China and Venezuela.

1930 In an interview with the local newspaper Arbetarbladet in 1932, Adolf Ahlgren was asked: What would Läkerol have been without advertising? He answered “I would naturally still have my money, but I would also still have the goods. In other words, I would never have succeeded. No product sells itself.” This was something that Ahlgren was quick to grasp, and he was something of a pioneer when it came to marketing his products.

One of his early ideas was to solicit endorsements from well known people who described Läkerol’s excellent qualities. During his travels around the world, he made a point of meeting celebrities and encouraging them to write personal letters about Läkerol. Without paying them a single cent, Ahlgren persuaded royalty, Nobel prize winners, politicians and singers to extol the benefits of the tablets and then published them in newspaper advertisements – often when the individuals in question figured in an article in the newspaper.

In 1932 Läkerol manufactured a few special gold boxes that were given to selected members of the royalty and scientists – an excellent way to create publicity. One year later was the first Swedish sailplane flight around the globe, and Läkerol could be seen in large letters. In 1939, Läkerol was sold in an impressive 35 countries! The name was the same, no matter where in the world you purchased a box of Läkerol.

1950 For many years, Läkerol chose to focus on speech and voices. Läkerol advertisements said something that still remains to this day: “Your throat and voice are worth taking care of. A good voice is always pleasant for yourself and your surroundings”.

1960 The emergence of a new youth culture: the pop generation. To attract this new generation, Läkerol was promoted as the perfect breath freshener before kissing – or after drinking beer.

1970 Läkerol concentrated on widening its product range and launched the new Läkerol Special in a major campaign featuring humorous advertisements and commercials.

1980 The Swedish tennis player Björn Borg did a series of advertisements for Läkerol.

2000 Several new flavours and varieties of the classic box have been added over the years, alongside several new product concepts. GIANTs, XTREME, split!, Fresh Drops, Dents, CARE and DARK are all exciting new varieties that have become part of the Läkerol family during the 21st century.

Cloetta is committed to preserving the legacy left by Adolf Ahlgren. The well known “A” on the tablets and packages is not just a mark of quality – it is also a tribute to Läkerol’s founder! But at the same time that Läkerol is proud of its traditions and history, today it is a modern, contemporary and forward-looking brand.

The future vision is to realise the concept makes people talk – in other words, to encourage people to express themselves and make their voices heard.